When was the last time you talked to someone on the bus, in a waiting room or any other “waiting” kind of place in public? The chances are that it has been a while. If you’re waiting somewhere, your phone is in your hand and the entire waiting area looks something like this… 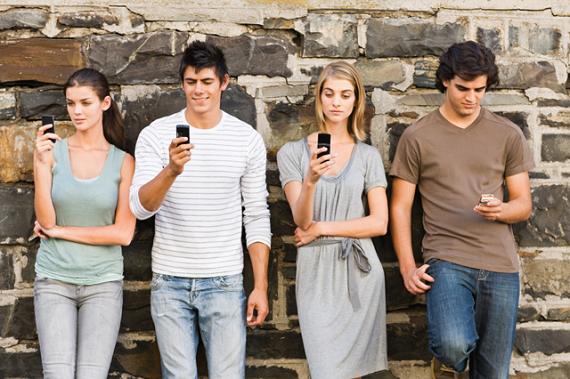 The predominance of technology and smartphones in particular has lead to many suggestions that creativity is being killed by our reliance on these tools. This isn’t a new thought - people were suggesting that technology was extinguishing creative impulses long ago. When I was a kid, it was TV and computer games that were to bring the downfall of imaginations everywhere.

Yet here we still are, creating stuff.

So, what’s the deal really? Aldous Huxley wrote Brave New World back in 1932 where he suggested a future in which humans sated a constant desire for distraction through technology. Thought could be kept at bay because we would simply zap any boredom by distracting ourselves with our technological devices.

That’s often the crux of the argument - that we’re sacrificing original thought for keeping ourselves constantly entertained. It’s also argued that if we can find everything online somewhere, we don’t give ourselves room to problem-solve and innovate on our own.

Others argue that technology is enhancing our creativity, so who’s right? Let’s look at both sides of the argument...

Have you seen a meme like the one below floating around the internet recently? 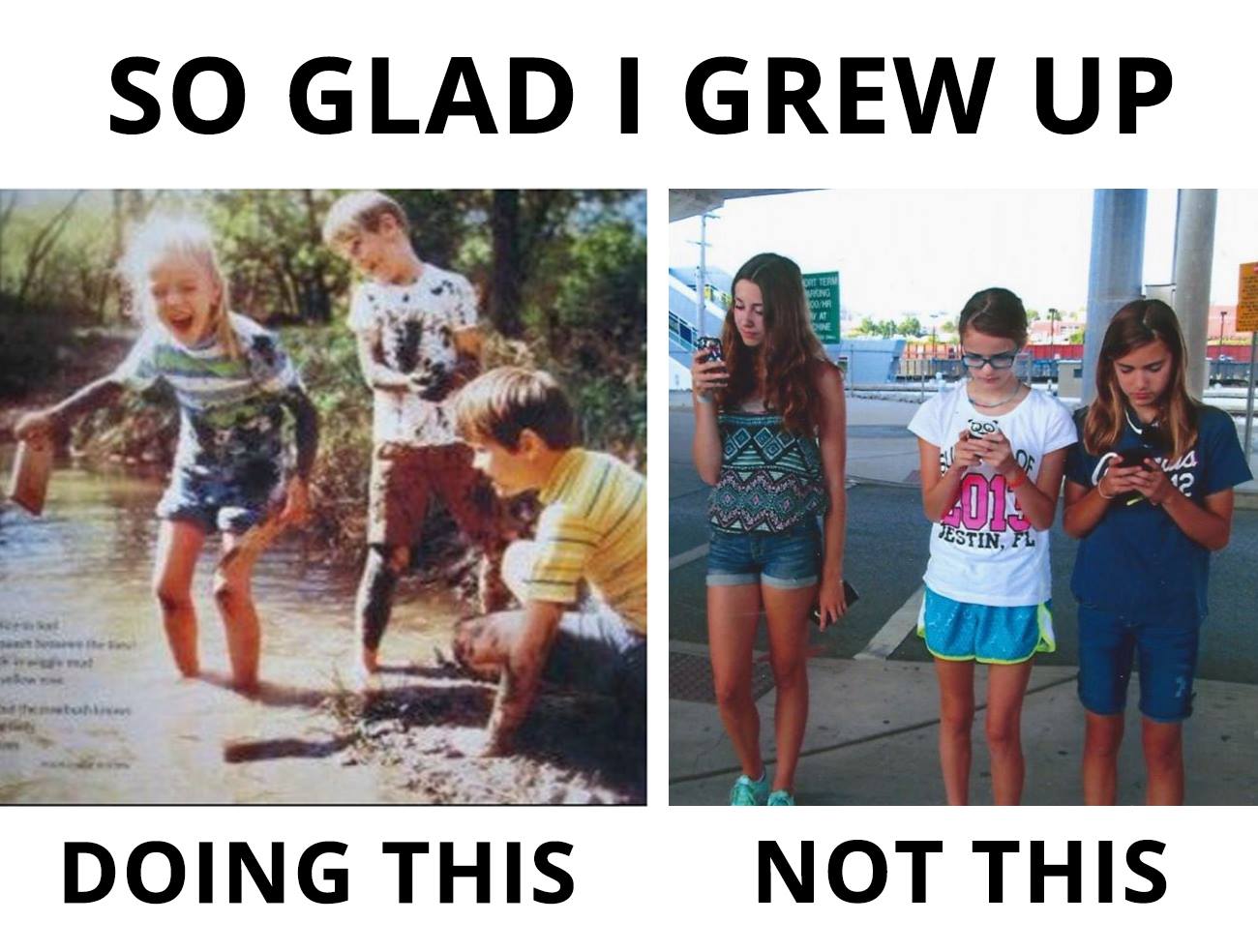 A strong argument for technology killing creativity is that kids (and adults) who always have their heads in their phones, tablets or laptops lack imaginative activities that help to promote creativity.

Has the device in your hand become the technological distraction Aldous Huxley described, keeping thought at bay?

Scientific study tells us that we need time to daydream as daydreaming boosts our creativity. If we’re filling any possible down time with scrolling through devices, are we inhibiting that daydream time? Creativity is often referred to as a “use it or lose it” discipline. You might work in a creative job role, but even you could be strangling your creativity by being fastened to a device constantly. 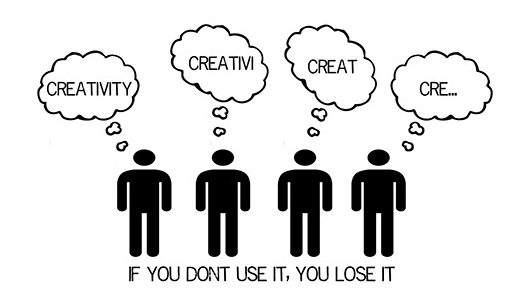 Copying and Lack of Originality is Rife

You can access basically anything you like online. There are templates for everything and even academic information is available all over the internet, resulting in more piracy and allegedly, less creative thought when it comes to academic settings.

Smashing Magazine wrote about the disappearance of creativity in web design and development. They speak of templates, The Grid and “rules” about web design inhibiting creative design. The author concludes that technology is killing creativity to a certain extent, but it’s not dead. It’s becoming the battle of machine vs. man, where man can win based on imagination (if we’re willing to nurture it).

Lack of originality is one thing with content, but technology is also accused of promoting lazy communication and diminishing our creativity in that area. Check out what The Guardian has to say:

“In fact, the web has done a great deal to kill people’s creativity. From the use of emoji in lieu of words, to the proliferation of pre-determined functions to express our views – liking, sharing, and, in some cases, disliking. These new universals of human interaction promote efficient – but lazy – behaviours so that we can devote more time to consuming more content.”

Newsweek reported on the findings of a recent study that indicated that while intelligence scores have steadily risen, creativity scores have been declining since 1990. The implications of this are sweeping as they say:

“The necessity of human ingenuity is undisputed. A recent IBM poll of 1,500 CEOs identified creativity as the No. 1 “leadership competency” of the future. Yet it’s not just about sustaining our nation’s economic growth. All around us are matters of national and international importance that are crying out for creative solutions…”

While they haven’t yet conclusively determined what is behind the score drop, they did have this to say with regard to technology:

“One likely culprit is the number of hours kids now spend in front of the TV and playing video games rather than engaging in creative activities.”

Ok, we can’t really argue that technology has facilitated a glut of copycat content, killed conversation (even at dinner!) and provided a constant source of entertainment where otherwise boredom may prompt creative thought. Is there a case for technology enhancing creativity?

Even with all the data we have available and the content already out there, we still need innovation and creativity to know what to do with it. Technological innovations themselves require creative thought to get them going, otherwise how would we end up with Google, Uber or Air BnB?

Another example lies in marketing; we have all kinds of “big data” available to make narrowing down a market much more accurate than it was previously, yet even if you identify a new market or segment, you’re going to have to be innovative about how you capture them.

Technology has expanded the boundaries of what’s possible with creative pursuits such as movie-making, music and graphic design. This has provided more scope for creativity, possibly even invited more participants to join in.

For professionals, look at examples such as CGI in movies or tools created to make graphic design more accessible, the online platforms to promote that content. That accessibility runs across the gamut of creative pursuits. Prior to the internet, the public may have only been exposed to those deemed by “experts” to have creative prowess. With the internet, the curtain is lifted and more people are discovered online every day. Artists like Bach and Van Gogh were not famous in their own lifetimes, whereas if they were alive today, the chances are they would be well-known.

Does this exposure help overall creativity? Well, it certainly helps to spark ideas in others and to expose them to more avenues for mentoring, training and creative growth themselves.

As The Guardian puts it: “technology deserves some credit for lifting the institutional and bureaucratic barriers that often limit creative talent.”

This may sound like the opposite to what’s going on when everyone has their phones in front of their faces, but technology is sparking communication in other ways. You can chat with people across the world, share ideas and information and generate creative ideas. Online knowledge has launched the creative careers of many - look at the freelance economy as an example.

You can safely have a healthy debate to argue both sides, so where does that leave us? Technology is here to stay and only continues to advance, so perhaps one of the most sensible arguments is for a balanced consumption of technology and information, much like how we view our diets.

There is the thought that our primitive ancestors benefited from taking in as much information as possible - it would have been necessary for survival to notice everything about their surroundings. The difficulty now is that in an age of information overload, our brains need to be trained to avoid the glut and filter only what is needed. This fits in with what we know about needing to nurture the right environment for creativity.

David Ryan Polgar presents the idea of the “Mental Food Plate”, a kind of balanced diet for the brain. Part of this concept involves being mindful about what you do consume and exercising your “mental muscles.” 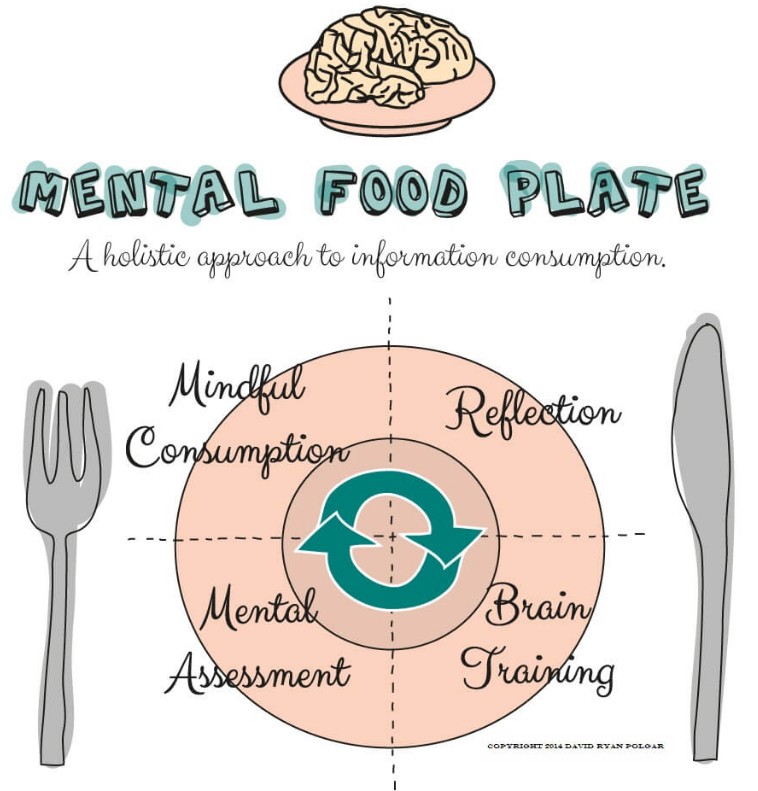 There are good arguments to be made for both sides of this debate. Yes, we’re seeing evidence, such as lower creativity scores, which may point the finger at technology. We know people are spending more time distracting themselves on electronic devices and possibly inhibiting the creativity, which can come from boredom and letting thoughts wander.

On the other hand, technology has allowed developments in all kinds of creative pursuits that have pushed boundaries from where they were before. It has also made many forms of creativity and the knowledge needed to pursue them more accessible than it was for previous generations.

It’s currently a debate that is in need of further studies, but one thing most can agree on is the need for balance. If you want to nurture your creativity, you need to look at how you balance the impacts of technology and information with the mental space needed to create.